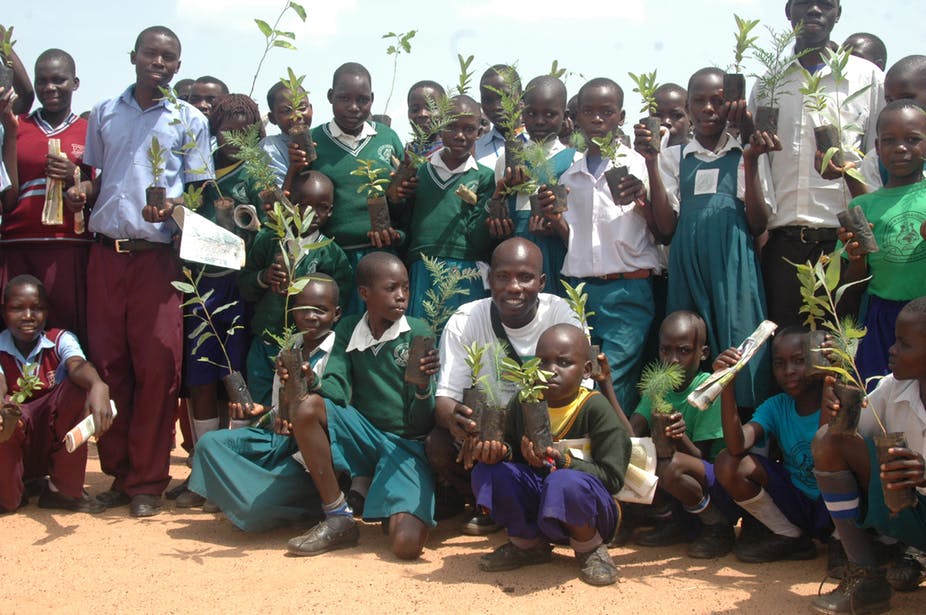 The media release also informed this article in The Conversation: Sowing seeds of hope with revived forests and farms

WARSAW, 17 November 2013 – One young Ugandan man’s actions to prevent his mother and sisters from being raped have awarded him a voice at international climate talks in Warsaw.

Otim Joseph, a 29-year-old from Kutgim in northern Uganda, was one of 10 young entrepreneurs speaking at the Global Landscapes Forum yesterday.

The young leaders—chosen from 150 entrants from 50 countries—opened the global landscapes talks alongside the UNFCCC COP19 climate talks in Poland.

“During the civil war in Uganda, a lot of trees were cleared by the army to help with visibility to see the rebels,” says Joseph, who was only two years old when the Lord’s Resistance Army insurgency began in 1986 in Uganda.

Now a forester for Uganda’s National Forestry Authority, he explains: “This meant that women had to walk to bush land, in some cases up to 10km away from their own communities, to collect firewood.”

This is when they would be raped.

“To witness this terrible thing … I had to stop it from happening to my mother and sisters,” says Joseph, who has four sisters.

In 2005, after almost 20 years of insurgency, he started collecting seeds from native trees to restore the forests on the post-war landscapes.

“I wanted trees to grow fast, so that women could collect firewood from closer to home,” he says.

Soon after he started a nursery which today has more than 400,000 seedlings.

“I only buy 10 percent of my seeds, like pine. The rest are all sourced from African natives, such as Cassia, Luciana and Markhamia.”

He donates trees to schools and communities, and also helps train teachers, school children, and even the Ugandan army, to plant trees as part of his reforestation work in Uganda.

“If children see me planting the trees, then they are inspired to plant their own trees,” he says.

And when asked how he communicates the benefits of the reforestation, he says: “I tell the school children to stand up in the classroom and look outside.”

“When they look, they can see the difference that the trees make to the landscape.

“The woodlots we establish will not only serve fuel wood purposes—timber, poles, food and herbs will also be derived from the trees,” Otim says.

“We now plant short, medium and long-term maturing tree species and this goes along way to the restoration and conservation of biodiversity.”